I got back to the whole working out reality on January 1 (how trite)!

I started back with Rubber Glove – to set my cycling FTP and LTHR for the Tour of Sufferlandria, which is coming on February 6-14.

Then on Saturday, January 2, I went to the gym and lifted the things. It was quite wonderful. I go to the Downtown Oakland YMCA. They have child watch, which is $2 an hour for child care while you are in the Y, so Pip gets to go to “Y School” and I can get a workout in.

The lifting was fun. I bought a program that I’m going to be using, if not following, as it’s not triathlon specific but I really like the instructions and the sets/progressions.

For the record, I squatted 20 pounds. 20. Sigh, big ass with no muscles. I am the poster child for glute amnesia. BUT I’m not gonna jack my hips like I did back in 2010-11, I’ve been keeping my issues at bay with yoga and increased strength is gonna help me start to get ahead of the curve.

20 pounds means that for all the running I do, my poor quads are doing just about all the work, all the climbing, all the cycling. Poor quads! The great news about having suck weak glutes and hammies is that progressing them is probably gonna go quite nicely! Stronger ass = faster run splits!!

Now, other things, I did much better than I expected at. I can do a cable row like a boss, so the old lats are still present and accounted for.

Hola! It’s been a hell of a week. Where to begin…

I’ve got this race coming up at the end of the month, the Rodney Strong Vineyards Vineman Monte Rio – Sprint. I am apparently a sucker for races with really long names, June’s race is the 50th Annual Dick Houston Memorial Woodminster Cross Country Trail Race. Which you should really try to do if you’re in the Bay Area on Father’s Day.

(N.B. The Tilden Tough Ten is not sold out yet! It’s a great, cheap, local race. Get on it if your schedule allows!)

Anyway, Sprint triathlon, four weeks away! I jiggered my training plan and instead of plowing through and then having to make things up for two weeks I dropped back to the last recovery week, and will complete the last three week bloc in time to have a intense taper week and be race ready on May 31.

I’m feeling good about this decision. My energy was in the tank on Monday, I was not prepared to hit the most intense week of training ever (no joke, this is the most and most intensely I have ever trained, ’tis dope).

Wednesday morning I was scheduled to hit the bike for a really hard trainer session. The last time I used that video (The Long Scream, no intimidation there!) I cracked. I got eleven or so minutes in and could not hold my power. I dropped my effort and finished the video but at a much lower level that I was targeting. I was scared. I didn’t get out of bed, I didn’t do the workout. I rallied to hit the exercise bike in the gym at lunch – a poor substitute but I’m glad I made the effort.

This morning I was schedule once again to get up early and hit the bike trainer for a hard video. This time it was Fight Club and then a twenty minute run. I was intimidated and scared. I’d never run after such an intense bike workout. Then I figured out what happened on Wednesday because it happened again this morning.

I had a dream that I woke up and decided not to do the video, that it was too hard and I was too tired and I couldn’t do it. I dreamt that I changed my alarm and slept late.  WTF brain? Today I managed to break through the mental fog to realize that I was dreaming and the alarm was not for a few more hours. It was still a struggle to get up and out and down to the bike but I’m damn proud of myself.

The workout itself was bollocks. My legs fell off about half way through. I couldn’t even approach my watts. I soldiered on based on RPE – I might not make the watts but I was going to do the work dammit. Then I went running and it felt great. I busted my ass on the bike for an hour and then had a nice and easy twenty minute run.

Then I left for work and shit got weird. I rode my bike the mile and a half to the train station and dropped it off at the valet (that’s how we roll in Oakland!) There is a short walk to the fare gates and I had plenty of time to get my train. I wanted to run. I really, really desired to run. I got in about fifty meters and it felt amazing! I wanted to ditch work and go hit about five miles of trails with my dog.  Right now, I want to go running. I want to get moving, I feel amazing. 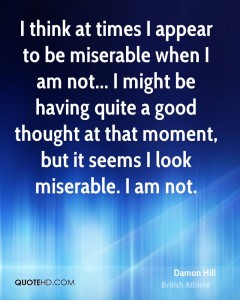 I’m feeling very optimistic for my triathlon in May. I think it’s going to go very, very well.

Have a great weekend y’all! May the crazy run strong in you.

The Diablo Trail Adventure is coming up in less than three weeks!

Training is peaking this week. Five miles at lunch on Tuesday, a 45 minute tempo run today, and 12 miles on Sunday. I feel great. The heart rate monitor is helping me target my training to the correct zones. As I suspected, before I was using it my fast runs were too slow and my slow runs were too fast.

I’m not sure I’m ever going to understand what “comfortably hard” means but I’m getting to grips with “embarrassingly slow” for my recovery days. I think I’ll label them “unashamedly slow,” I’m never going to be embarrassed that I’m getting out there and getting it done, no matter the speed (or lack there of).

It’s always a bonus when you can feel your increased fitness. Yesterday I was riding my bike up the hill and I got out of the saddle a lot. It was easy! Just up and out and booking it to survive a 1.75 mile bike commute through East-ish Oakland. I never used to get out of the saddle. Even short jumps left me completely out of breath. Getting out of the saddle was reserved for going downhill and relieving some pressure in my back.

I don’t ride a long way, but I get on my bike twice a day, five days a week. Mornings down the hill, evenings back up. My gearing choice in the evening depends on what my workout was the day before. In the mornings, down the hill, I rarely shift out of the hardest chainring/cassette combo. As an experiment, I stayed in my biggest chainring going up the hill last week, in the evening. It was doable, not super easy, but it didn’t exhaust me to buckle down and get up the hill that much faster.