I’m just trying to set some goals for my next race, the Oakland International Triathlon, on August 29. (You’re gonna come out and cheer, right?) (I won’t be finishing until, like, 11:00 AM, at the earliest, you can make it to the finish line by then!).

I really want to do it in three hours!! But I don’t think I can and that’s bumming me out, so it’s time to have a conversation with myself. 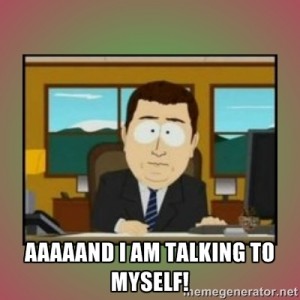 Be real jackass! You did 1:35 at Monte Rio going hard the whole time. There’s no way, in the same year, you’re gonna maintain the same pace for twice as long, it doesn’t work that way. If you pulled a 3:10 that would be phenomenal!

Really looking at training data, what is realistic? What is your body telling you it can do?

Realistic goal, let’s say 38 minutes, anything up to 40 minutes will be just fine. (and look, we’re back to writing in the first person) 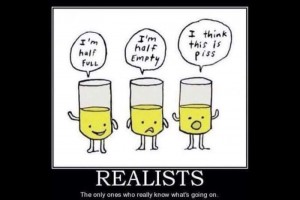 T1 is long on this race – it’s a run from the water, up and over a pedestrian over crossing and into the transition area. Looking at last year’s times, I’m giving myself 8 minutes.

Bike – this is where I feel the least prepared to go how I believe I should be capable of going (torturous grammar!). I love biking and I want to be able to hammer the shit out of a bike. But 25 miles is a long way to go. Given that it’s gonna take me at least an hour and a half I need to recognize that no one could hammer for that long.

My last race I averaged 16.8 mph. My last hard training intervals I was pushing to get 20 mph and I was getting 18-19 mph for a very hard interval. I should think that 16 mph would be really good! That would give me 1:33 for the bike and anything under 1:40 will be fine. 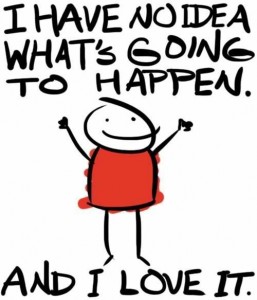 Tempering my expectations doesn’t mean I’ll be pissed off if I go faster! And once again, I will race without a watch on swim and run and go by RPE. I will use my bike computer on the ride. The bike is where I tend to really back off if I don’t have something to spur me on.

Instead of being disappointed, I need to fuel my hunger! These are the thoughts for the off season, for strength training, for the days I don’t want to get up at 5 and get on my bike trainer. What do I want? Well, for one, I want to be in the top half of my age group at The Oakland International Distance Triathlon.

T2 is much shorter, the dismount is right before transition, so I’m giving myself 2:00.

and the Run. Sigh. My right IT band has been in not premium shape the last two or three weeks. Hills are just deadly to it. Good thing my race is just about pancake flat! My usual weekly long run on trails has been replaced my a run from my house, but that’s good too as my race is on asphalt so I need to be used to the surface. I’ve been doing my old PT exercises and the leg seems to be holding up. The IT just gets tired easily.

The plan is to stick to doing PT exercises every day, avoid steep hills and stairs, and generally taking care of myself. This is on top of the right ankle injury from swimming and the shin splints that have been making a return.  I don’t know why my legs are complaining so but I also know that I had no such problems in my last training build and I was doing drills during almost every run. Hmmmmm…

Pace goals wise, this week I did thirty minutes at goal pace/effort and that ended up being very consistent, I was able to get to and stay at 10:30/mile without undue effort. I feel that the run pace is dialed in and that’s going to be my goal, which would give me about a 1:06.

That means my totally reasonable, based on training data, goal time is

Which, by the way, would be a thirty minute PR over the distance, which is HUGE. Instead of having my chamois in a bunch because I won’t be hitting three hours, I should be well chuffed that I could cut ~12% off my previous best at this distance. 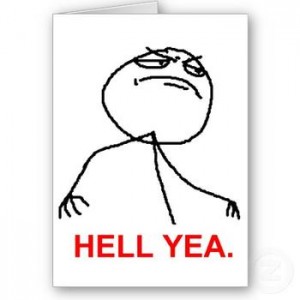 Further goals include: Not giving myself stomach cramp by chugging a gel in T2, not giving myself a back cramp by biking too hard, not losing ten seconds in transition to worn out bike shoe ratchets (solved by the purchase of tri bike shoes last weekend).

So there. I feel better now. I have a reasonable, training based goal time.

2 thoughts on “I am not getting aggressive!”